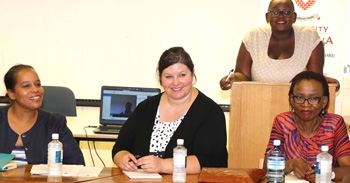 The recent visit by a United States of America envoy has raised hope that the University of Botswana’s Okavango Research Institute (ORI) will soon receive more research funding from American entities.

Chargé d’ Affaires, ad interim at the American Embassy in Gaborone, Ms Kali Jones, paid a short visit to ORI on November 16, 2018 during which she was briefed on the history and mandate of the institute which has been described as Botswana’s premier research institute on one of the world’s heritage sites, the Okavango Delta.

Acting ORI Director, Professor Keta Mosepele, appreciated the US for recognising ORI’s role towards conservation of the Okavango Delta as one of the world’s most precious natural resources. Professor Mosepele acknowledged that while there had been financial assistance from the US before, such was, however, not enough to carry out some of the research in the delta.

He said on numerous occasions applied for funding to several American entities but were not successful. In other words it had been a struggle for ORI to get access to such entities, he observed.

However, Professor Mosepele expressed hope and wished that the visit by the envoy would possibly provide ORI with a unique opportunity to have access to American entities to get funding.

Acting Deputy Vice Chancellor for Academic Affairs, Dr Oathokwa Nkomazana, said as management they would do whatever was necessary to facilitate whatever was required between UB and the US embassy.

Dr Nkomazana who prefaced her short intervention reminiscing about the 1980s when America provided food assistance to Botswana, said UB valued the enduring relationship the US has enjoyed with various organs in Botswana.

She said it was imperative for UB to forge such relationships and collaborations especially in the face of dwindling resources.

On the other hand, Ms Jones said she had a vested interest in what ORI was doing given her professional background in conservation and public health issues. She said the US government was keen on seeking partnerships with different institutions abroad.